The following are picks in recent mock drafts for the Bengals:

Arguably the top college football recruit in 2019, Thibodeaux has lived up to the hype so far with 12 sacks and 23.5 tackles for loss over 21 games in his first two seasons. In a pair of Pac-12 Championship Games, he's been virtually unblockable -- 18 QB pressures, 4.5 TFLs and 3.5 sacks in those two games combined.

Current Oregon (and former Texas A&M) DC Tim DeRuyter has compared Thibodeaux's explosiveness to that of Von Miller, one of DeRuyter's former players, as he said that Kayvon is "probably the first person that I've seen in a while who has that explosiveness off the edge like Von" [Miller].

The Bengals (17) ranked last in the NFL in sacks last season. Even though they signed Trey Hendrickson to a four-year deal, Carl Lawson (team-high 5.5 sacks) departed via free agency.

The Cincinnati Bengals surprised some -- including this writer -- when they passed on Penei Sewell and drafted Ja'Marr Chase at the start of the 2021 NFL draft. If they are still picking near the top of the board, you might think that the organization goes in a different direction, looking to add to the offensive line instead. Alabama tackle Evan Neal looks like he could be the next in a long line of Crimson Tide offensive linemen to make his way into the first round.

Thibodeaux put up 34 pressures in only seven games this past season, with a ridiculous 12 coming against USC in the 2020 Pac-12 Championship Game. He's an ironman for the Ducks and averaged just over 67 snaps a game last year. He's got the ideal frame for the edge, too, at 6-foot-5, 250 pounds.

Here is where the Cincinnati Bengals rank in terms of average, best and worst:

Below you will find a Week 4 roundup for the Bengals in our consensus 2021 NFL Power Rankings.

Joe Burrow is still feeling his way back into the offense after last season's knee injury. In the Week 3 win over Pittsburgh, Burrow audibled to a designed QB run, something he said he didn't know if he'd still be able to do coming into the season. His numbers should get better as the season progresses. Burrow has looked to be too aggressive at times this season, which has contributed to his four interceptions through three games. But given his strengths in decision-making and accuracy, those miscues should taper off as the campaign goes on. -- Ben Baby

Entering Week 3, only one team had allowed more sacks than the Bengals. This was a terrible trend, especially coming off a 2020 season in which No. 1 overall pick Joe Burrow suffered a ghastly knee injury due to faulty blocking. Sunday's 24-10 win over the Steelers was a huge step forward for the team and an offensive line that allowed zero sacks to a Steelers defense that had registered at least one QB takedown in 75 straight regular season games, an NFL record. The Steelers played without their best pass rusher in T.J. Watt, but the Bengals deserve credit for addressing their biggest concern while picking up a huge victory against a division opponent. Cincinnati can build some honest-to-goodness momentum with the winless Jaguars up next on Thursday night.

Below you will find the weekly NFL regular-season schedule for the Bengals in 2021.

The table below are all of the 2021 NFL Draft picks selected by the Cincinnati Bengals.

The chart below displays the Fantasy Football Average Draft Position (ADP) movement over the past 30 days for Cincinnati Bengals running back Joe Mixon in 12-team standard-scoring formats. 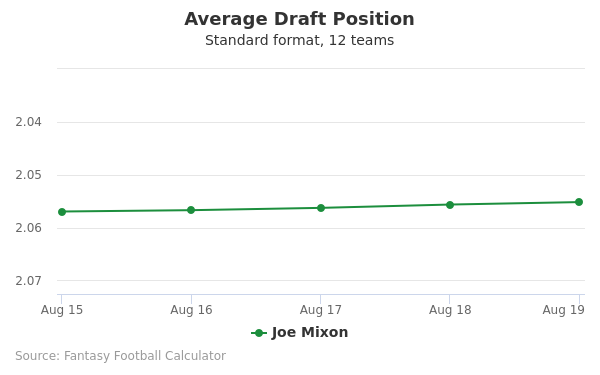