Throughout the year and leading up to the 2022 NFL Draft, we will update our Houston Texans Mock Draft Roundup showing picks for the Houston Texans from several prominent sites and draft analysts.

The following are picks in recent mock drafts for the Texans:

Houston goes back to the Big Ten for an edge rusher. There is a lot for the Texans to sort out within the next six months and their draft outlook will look a lot different.

Amazingly, the Texans defeated the AFC South division leading Titans in Tennessee, indicating the players haven't given up on themselves or the organization. Despite the impressive road win, chances are Houston will still be making a top five selection in April's draft. It's likely the Texans trade beleaguered, outcast quarterback, Deshaun Watson in the off-season to acquire additional draft picks; while drafting a signal caller with their first round option. Quarterbacks are generally the face of a football organization and Corral plays in the southern region of the country ( Ole Miss Rebels ) which may excite a frustrated fan base.

Here is where the Houston Texans rank in terms of average, best and worst:

Below you will find a Week 13 roundup for the Texans in our consensus 2021 NFL Power Rankings.

Not much has changed for a Texans team that has only won one game since Week 6 and that already had a low confidence rating. Houston got a surprise win in Nashville in Week 11 but couldn't build on it Sunday, losing by a touchdown to the Jets. Now, the biggest question remaining for the Texans is where they pick in the draft, after having just one first-round pick since 2018. Houston is currently projected by ESPN's FPI to have an average draft position of 2.6 and has a 97.3% chance of having a top-5 pick. -- Sarah Barshop

There's no question Tyrod Taylor makes the Texans more competitive on offense, but let's not mistake basic competence with actual quality. Taylor threw two touchdown passes in the second quarter as Houston took an early 11-point lead on the visiting Jets, but the Texans' attack went to sleep after that in an eventual 21-14 loss. How bad was the offense after its quick start? The Texans managed just 45 yards in the second half and were unable to score a point in their final seven drives against the league's No. 32-ranked defense. Meanwhile, Justin Reid is still trying to figure out why he didn't play. January 10th can't get here fast enough.

Below you will find the weekly NFL regular-season schedule for the Texans in 2021.

The table below are all of the 2021 NFL Draft picks selected by the Houston Texans.

The chart below displays the Fantasy Football Average Draft Position (ADP) movement over the past 30 days for Houston Texans quarterback Deshaun Watson in 12-team standard-scoring formats. 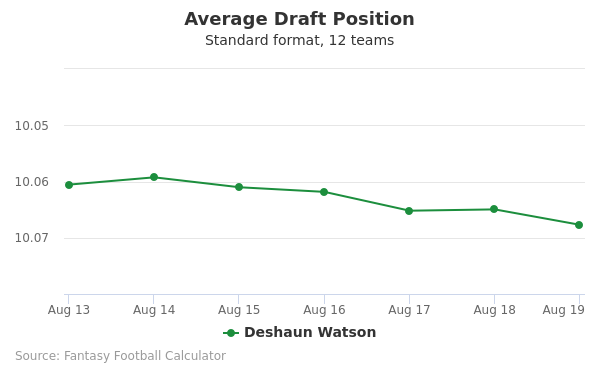