Throughout the year and leading up to the 2022 NFL Draft, we will update our Baltimore Ravens Mock Draft Roundup showing picks for the Baltimore Ravens from several prominent sites and draft analysts.

The following are picks in recent mock drafts for the Ravens:

The Ravens signed 33-year-old (in September) Alejandro Villanueva to start opposite Ronnie Stanley, but the team still needs a longer-term replacement for Orlando Brown. Nelson enters his true junior season as a three-year starter at left tackle, but he could become the team's starting right tackle in 2022 (or 2023). In addition, Nelson's left tackle versatility would provide insurance for the Ravens in the event that Stanley misses time in the future like he did last season.

With additions to the edges this draft cycle, as the Baltimore Ravens added Odafe Oweh and Daelin Hayes in the 2021 NFL draft, the Ravens could look to bolster the interior next draft cycle.

That could make Jordan Davis from Georgia an ideal fit. Davis does the bulk of his damage against the run, but his ability to align at both 1-technique and 3-technique could make him an intriguing option for NFL defenses. If he starts to be more of a factor attacking the passer, watch out.

While he's not quite the Bosas or Chase Young, Harrison is next in the Ohio State defensive end pipeline. The 6-foot-6, 265-pounder earned an 86.6 pass-rushing grade as a sophomore in 2020.

Here is where the Baltimore Ravens rank in terms of average, best and worst:

Below you will find a Week 4 roundup for the Ravens in our consensus 2021 NFL Power Rankings.

Lamar Jackson has been uncharacteristically sloppy at times, committing five turnovers (three interceptions and two fumbles) in the first three games. But Jackson has more than redeemed himself with how he has carried the short-handed Ravens this season. In an upset victory over the Chiefs, he came back from a double-digit deficit in the fourth quarter by running for two touchdowns. In the last-second win at the Lions, Jackson had one of the best passing days of his career and converted a fourth-and-19 with a 36-yard completion to Sammy Watkins. Asked why no one should count out the Ravens despite the numerous injuries, wide receiver Marquise Brown said, "Because we got Lamar Jackson." -- Jamison Hensley

Justin Tucker was already on a Hall of Fame track before Sunday in Detroit. He might have cemented his place in Canton with an NFL record-setting 66-yard field goal to beat the Lions and touch off a huge celebration at a suddenly silent Ford Field. Tucker's brilliance covered up for the sins of his team: Marquise Brown dropped three potential touchdown passes in the first half, and the Baltimore defense folded in the fourth quarter against a tepid Detroit offense. But the Ravens still had Tucker, the not-so-secret weapon who has dominated at his position for a decade. Said John Harbaugh: "He's the best kicker in history." There's nobody else even close.

Below you will find the weekly NFL regular-season schedule with results for the Ravens in 2021.

The table below are all of the 2021 NFL Draft picks selected by the Baltimore Ravens.

The chart below displays the Fantasy Football Average Draft Position (ADP) movement over the past 30 days for Baltimore Ravens quarterback Lamar Jackson in 12-team standard-scoring formats. 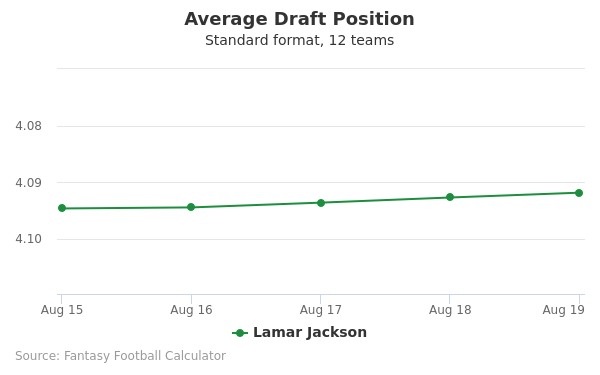