Throughout the year and leading up to the 2022 NFL Draft, we will update our New York Giants Mock Draft Roundup showing picks for the New York Giants from several prominent sites and draft analysts.

The following are picks in recent mock drafts for the Giants:

The Giants got a nice value with Azeez Ojulari falling to the middle of Round 2 in the 2021 NFL Draft and add to their pass rush here with Jackson. While not as productive in a shortened 2020 campaign, Jackson led USC in sacks (5.5) and TFLs (11.5) as a true freshman in 2019 and has the traits to become a top-five pick.

The Giants have made a number of upgrades to their pass rush (including Drake Jackson earlier in this 2022 NFL mock draft) and to their secondary, but they could use a difference maker in the middle of the their defense. Harris enters his junior season as a three-year starter and had 79 tackles, seven TFLs, 4.5 sacks and an interception in 2020.

After all, we are entering the "year of no excuses" with New York Giants signal-caller Daniel Jones. The team added wide receiver Kenny Golladay in free agency as well as the shifty Kadarius Toney in the draft, and with Jones entering year three, he has to take a step forward.

Assuming he does, linebacker is the kind of position that Dave Gettleman could look to address early in the draft. Christian Harris is a former defensive back, and his athleticism makes him perhaps the ideal modern linebaker.

Thanks to the draft-night trade between the Chicago Bears and the New York Giants, the deal that allowed the Bears to move up for Justin Fields, the Giants are now back on the clock. Again, quarterback could be in play here if Daniel Jones fails to take the kind of step forward Giants fans are hoping to see in 2021. Or, Dave Gettleman could package this pick and the other first-round selection to move up to the top of the board and add a new face at QB.

Assuming that the organization wishes to move forward with Jones, offensive tackle could be in play for the Giants. Andrew Thomas looked better down the stretch in the 2020 season, Matt Peart performed well for a third-round selection, and the organization also returns Nate Solder for the 2021 campaign after he opted-out in 2020. Still, if the unit does not perform as well as hoped, tackle could be in the mix next season. Nelson started all 13 games at left tackle for the Miami Hurricanes as a true freshman in 2019, and followed that up with another seven starts in 2020.

Here is where the New York Giants rank in terms of average, best and worst:

Below you will find a Week 2 roundup for the Giants in our consensus 2021 NFL Power Rankings.

Ojulari registered a sack and three tackles in 34 defensive snaps -- more snaps than the other five rookies combined -- in Sunday's loss to the Broncos. He had his ups and downs in his NFL debut. First-round pick Kadarius Toney was on the field for just five plays, and sixth-rounders Gary Brightwell and Rodarius Williams played 22 combined snaps, half on special teams. The Giants' third and fourth-round picks, Aaron Robinson and Elerson Smith, are on injured reserve or the physically unable to perform lists. -- Jordan Raanan

Daniel Jones keeps doing it. The third-year quarterback has struggled with inconsistency throughout his short NFL tenure, and we saw more of the same in Sunday's 27-13 loss to the Broncos. Jones moved the Giants well at times, connecting on a handful of downfield strikes against a Denver secondary that's notoriously stingy when it comes to surrendering chunk plays. But the game turned late in the third quarter, when Jones scrambled inside the Denver 15 and lost the football as he went to the ground. The resulting turnover short-circuited a promising drive and pretty much sealed Big Blue's fate. Jones is good until he's not ... and that's the problem.

Below you will find the weekly NFL regular-season schedule for the Giants in 2021.

The table below are all of the 2021 NFL Draft picks selected by the New York Giants.

The chart below displays the Fantasy Football Average Draft Position (ADP) movement over the past 30 days for New York Giants running back Derrick Henry in 12-team standard-scoring formats. 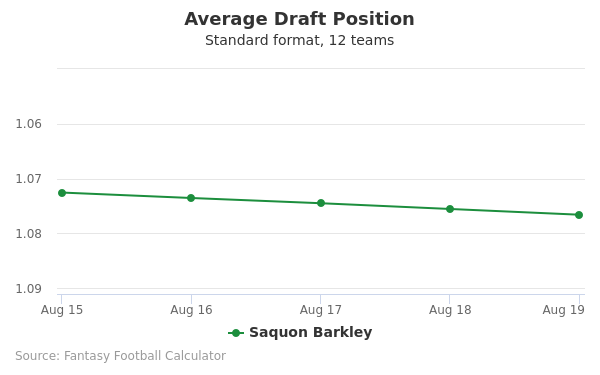