The following are picks in recent mock drafts for Washington:

Washington missed out on the top five quarterbacks in the 2021 NFL Draft and quarterback will be a very common position mocked to WFT in 2022 mocks, especially if they are picking inside the top 10. Ryan Fitzpatrick will start for Washington in his age-39 season, but he signed a one-year deal and there is no long-term answer currently on the roster.

One of college football's most accurate passers (70.0% career completion rate), Slovis had a bit of an up-and-down season in 2020 after a stellar freshman season, but he still led the Pac 12 in passing yards per game (320.2) last year.

There was a time when UNC's Sam Howell was the consensus "first overall pick of the future." That was after a freshman season that saw Howell throw for 38 touchdowns against just seven interceptions. But last year while his numbers improved in a few respects (his completion percentage jumped from 61.4% to 68.1%, and his yards per attempt leapt from 8.6 to 10.3) there is a case to be made that the offensive system is responsible just as much as Howell is for that increase in production.

Still, if he puts together a third-straight solid year, he will be in the mix for the QB1 spot. In this scenario he slides to Washington who, if they are picking this early in the draft, will be looking to finally lock down the quarterback position.

Here is where the Washington Football Team rank in terms of average, best and worst:

Below you will find a post-draft roundup for Washington in our consensus 2021 NFL Power Rankings.

Player who benefited most from draft: QB Ryan Fitzpatrick

For the first time in a while -- maybe ever -- Fitzpatrick will play without a clear replacement behind him. There's no Jameis Winston, Josh Rosen or Tua Tagovailoa -- among many others -- lurking. Washington considered drafting a quarterback but didn't feel desperate. Not only does he have a new level of freedom, but Washington drafted a speedy wide receiver in Dyami Brown to pair with free-agent signee Curtis Samuel and holdover Terry McLaurin. It also selected an offensive tackle (Samuel Cosmi) and a tight end (John Bates). Fitzpatrick might have his best chance to lead a team to the postseason for the first time in his 17-year career. -- John Keim

Ron Rivera knows the strength of his team is defense, and he set out to make that side of the ball even stronger with the first-round selection of Kentucky linebacker Jamin Davis. The heart of Washington's D is in the front four, and Davis addresses an area of need -- a speedy and versatile linebacker who can go sideline-to-sideline and cover. Meanwhile, Ryan Fitzpatrick dodged any fresh competition entering the QB room, and appears to be locked and loaded as the starting quarterback. That hasn't happened for Fitzmagic since his final season with the Jets in 2016. What a fun career.

Below you will find the weekly NFL regular-season schedule for Washington in 2021.

The table below are all of the 2021 NFL Draft picks selected by Washington.

The chart below displays the Fantasy Football Average Draft Position (ADP) movement over the past 30 days for Washington wide receiver Terry McLaurin in 12-team standard-scoring formats. 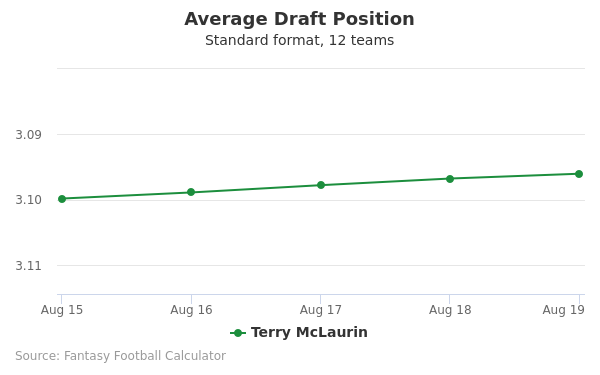