The following are picks in recent mock drafts for the Vikings:

A number of Minnesota's cornerbacks -- Patrick Peterson, Mike Hughes and Mackensie Alexander -- will be UFAs after the 2021 season and last year's first-round pick -- Jeff Gladney -- had a disappointing rookie campaign (PFF's 102nd-graded corner). In addition, safeties Harrison Smith and Xavier Woods are scheduled to become free agents in 2022 as well. The Vikings allowed the third-most 20-yard pass plays (63) and tied for allowing the most 40-yard pass plays (12) in 2020. In other words, there's a good chance they use their first-round pick on the secondary and Mike Zimmer gets a versatile safety prospect with Bolden here.

In the 2021 NFL draft we did not see an interior defensive lineman until the top of the second round. Could that change in 2022? If so, Perrion Winfrey is one of the leading contenders to force that issue. In 2020, his first season with the Oklahoma Sooners after playing junior college football at Iowa Western, Winfrey was named a Second-Team All-Big-12 selection by the conference's coaches. He played in all 11 games with eight starts, notching 19 tackles, including six for a loss.

The Minnesota Vikings added nose tackle Jaylen Twyman in the sixth round of the 2021 NFL draft, but could add Winfrey into the mix as another interior defender early in 2022.

McDuffie heads into his junior season having earned coverage grades of 83.7 and 77.6 in his first two years for the Huskies. He's also one of the best tackling corners in the country, with only two misses on 64 career attempts.

Here is where the Minnesota Vikings rank in terms of average, best and worst:

Below you will find a Week 4 roundup for the Vikings in our consensus 2021 NFL Power Rankings.

Kirk Cousins has been lights out for the Vikings in the best three-game start to his career -- eight passing touchdowns to zero interceptions and a 73.9% completion percentage. His fifth straight game with multiple passing touchdowns led Minnesota to its first win of the season versus Seattle, and he did it by capitalizing on his strengths. Cousins was 24-of-28 for 273 yards and three touchdowns when not pressured. (He has averaged 8.27 yards/attempt with no pressure in his career, fifth best in the NFL since he entered the league.) He dominated against the blitz. (Over the past three seasons, he has 26 TDs to two interceptions when being the blitzed.) And he continues to find success with Justin Jefferson, connecting on 20 of 30 passes for 254 yards and two TDs. -- Courtney Cronin

Vikings coach Mike Zimmer called it the best offensive game of his Vikings tenure. Kirk Cousins led Minnesota on three touchdown drives in the first half, then engineered a trio of second-half field-goal marches that chewed up more than 20 minutes of game time in a 30-17 win over the Seahawks at raucous U.S. Bank Stadium. Cousins has been, to be blunt, one of the best quarterbacks in the NFL through three weeks. "It's been a different Kirk," wide receiver Adam Thielen said. "He's just locked in and on time, he's trusting it." Credit is due, both to the forever-scrutinized Cousins and Klint Kubiak, a first-year offensive coordinator who has found an instant groove.

Below you will find the weekly NFL regular-season schedule for the Vikings in 2021.

The table below are all of the 2021 NFL Draft picks selected by the Minnesota Vikings.

The chart below displays the Fantasy Football Average Draft Position (ADP) movement over the past 30 days for Minnesota Vikings running back Dalvin Cook in 12-team standard-scoring formats. 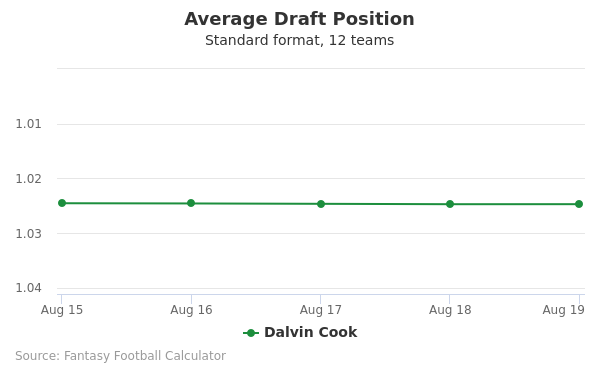