Throughout the year and leading up to the 2022 NFL Draft, we will update our New York Jets Mock Draft Roundup showing picks for the New York Jets from several prominent sites and draft analysts.

For a more inclusive lists of mock drafts for the New York Jets, check out our New York Jets Mock Draft Database.

The following are picks in recent mock drafts for the Jets:

The Jets use the first of two first-round picks on LSU cornerback Derek Stingley Jr. New York has upgraded the offensive line and can now turn attention to other premier positions.

Ikem Ekwonu is a polished run blocker that continues to improve in pass protection. New York selects their third first-round offensive lineman in as many years.

Hamilton has uncommon size for a safety (6-4 , 219 lbs), and exceptional athleticism buoyed with an explosive fluidity. New York will have to decide if re-signing starting safety, Marcus Maye is cost effective, considering his current contract pays him over 10 million, he'll want an increase in salary. Taking into account Hamilton's eight career interceptions and 16 passes defended, he could possibly tandem with a re-signed Maye and provide the Jets with a dynamic back end to their secondary.

Here is where the New York Jets rank in terms of average, best and worst:

Below you will find a Week 18 roundup for the Jets in our consensus 2021 NFL Power Rankings.

New Year's resolution: Get Robert Saleh some players on defense

The Jets, ranked 32nd in points and yards allowed, have surrendered a franchise-record 477 points. It's not a coaching issue, it's a talent issue. Consider: The previous high was 457, set last season with a completely different staff and scheme. Saleh, who made his bones as a defensive coach, needs help on all three levels, especially linebacker and safety. The Jets have four draft picks in the first two rounds. If at least two aren't on defense, there should be an investigation. -- Rich Cimini

After it was over, the focus of Bucs 28, Jets 24 was on Antonio Brown's antics, Tom Brady's heroics, and a New York fourth-down play call gone horribly awry. But Jets fans should focus on the positives: Their undermanned team hung tough against the champs ... and Zach Wilson is showing real progress in the season's homestretch. The rookie QB is now making the "layups" (coach Robert Saleh's term for routine throws), and his game tape on Sunday was dotted with several wow passes that showed off his improved rhythm and confidence.

Below you will find the weekly NFL regular-season schedule for the Jets in 2021.

The table below are all of the 2021 NFL Draft picks selected by the New York Jets.

The chart below displays the Fantasy Football Average Draft Position (ADP) movement over the past 30 days for New York Jets running back Le'Veon Bell in 12-team standard-scoring formats. 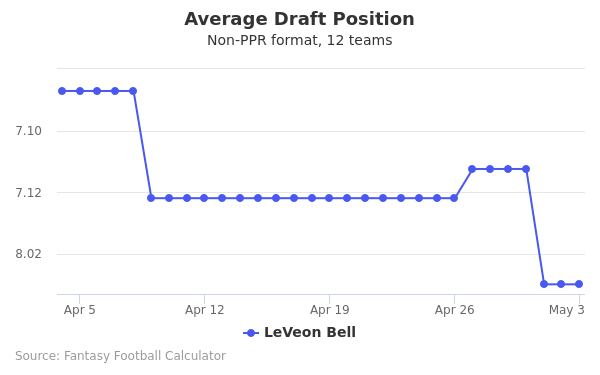