The following are picks in recent mock drafts for the Eagles:

The Eagles didn't add any competition via the draft for Jalen Hurts, but they will have three first-rounders in 2022 assuming that Carson Wentz plays a minimum of 75% of offensive snaps for the Colts in 2021. If they are picking this high based on their own performance (i.e., their original pick), the Eagles brass will likely add competition next year. A transfer from Auburn, Willis is arguably the most physically-gifted quarterback in this year's draft class with a chance to put himself in the mix for the top pick come next April.

Per The Athletic's Bruce Feldman, Coastal Carolina's DC Chad Staggs said the following about Willis: "We were undefeated, we had beat BYU, I thought we were pretty good on defense. And I felt like [Willis] single-handedly beat us. We couldn't tackle him. He's got a cannon. From a true physical ability thing, he was special."

Not only is Brandon Graham 33 years old, but Derek Barnett is scheduled to play the 2021 season on the fifth-year option. If the former five-star recruit is able to take a major step forward in his third season, he has the tools and athleticism to follow in the footsteps of recent Buckeye edge defenders to become a high draft pick.

The conditional 2022 second-round pick sent to the Eagles becomes a first-rounder as long as Carson Wentz plays at least 75% of the offensive snaps in 2021. Barring an injury, it's a near lock that the Eagles will own Indy's pick in 2022.

Both Jaycee Horn and Patrick Surtain II were off the board before the Eagles were on the clock in 2021 and the team drafted Zech McPhearson in the fourth round, but I could see the team using one of their first-rounders on the position in 2022. A five-star recruit, Booth has outstanding ball skills (see below) and if he plays with more consistency, he should hear his name called on Day 1.

Oklahoma quarterback Spencer Rattler stepped into the starting lineup after Jalen Hurts moved on to the NFL. Could a similar situation play out in Philadelphia? The Eagles made moves to build around Hurts in this past draft, trading up for wide receiver DeVonta Smith. But if the Eagles are picking this early, it might mean that the organization will be in the QB market next spring. Rattler needs to calm his feet in the pocket and not play so frenetically, but with a step forward this season he might challenge for that QB1 spot in the draft.

Cincinnati cornerback Ahmad Gardner burst onto the national stage as a true freshman in 2019, securing a Pick-Six in Cincinnati's upset win over UCF, and it was Gardner's touchdown that was the different. He added a second Pick-Six later that year against ECU. He earned a starting job by the end of the season, and held down that role for the Bearcats in 2020. Last season he ranked second in the ACC with nine pass breakups, and tied teammate Coby Bryant for fourth in the conference with three interceptions. He might be a dark-horse candidate for the first round at this point, but he is certainly someone that could play himself into the mix with a solid junior season.

Here is where the Philadelphia Eagles rank in terms of average, best and worst:

Below you will find a Week 6 roundup for the Eagles in our consensus 2021 NFL Power Rankings.

How they've improved: Hargrave has been the Eagles' best player through five games. He already has six sacks on the season, which is tops among defensive tackles and third overall in the NFL. It's also a half-sack less than his career high. Hargrave, 28, had four quality seasons with the Steelers before joining the Eagles in 2020. He was limited thanks to injury last season, but has turned into a dominant force in his second year in green. -- Tim McManus

The Eagles were in desperate need of a big play late in Sunday's matchup against the Panthers. They got one in each phase of the game during the final five minutes of a 21-18 win. T.J. Edwards' blocked punt, Jalen Hurts' 6-yard touchdown run and a Steven Nelson interception of Sam Darnold turned a five-point deficit into a three-point victory that snapped a three-game losing streak. Next up for the Eagles is a huge measuring-stick game against the reigning champion Bucs on Thursday night. It will take more than a strong finish to beat Tampa Bay.

Below you will find the weekly NFL regular-season schedule for the Eagles in 2021.

The table below are all of the 2021 NFL Draft picks selected by the Philadelphia Eagles.

The chart below displays the Fantasy Football Average Draft Position (ADP) movement over the past 30 days for Philadelphia Eagles quarterback Carson Wentz in 12-team standard-scoring formats. 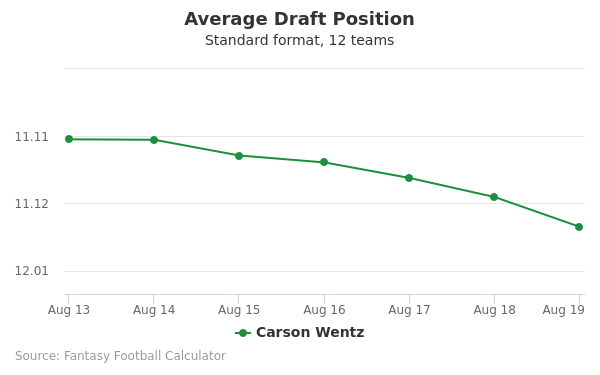