The following are picks from recent NFL mock drafts for the Cardinals:

Many expected the Cardinals to use an early pick on corner in the 2021 NFL Draft, but they used a pair of Day 3 picks instead to address the position with Florida's Marco Wilson and UCF's Tay Gowan in the fourth and sixth rounds, respectively. Considering that Malcolm Butler and Robert Alford will be unrestricted free agents in 2022, corner will be a popular position mocked to the Cardinals again.

Since 2014, the Buckeyes have had seven cornerbacks selected in the first round. Banks, who led the Buckeyes with seven pass breakups in 2020, has a good combination of size (6-1, 200), length and footwork.

It surprised a few observers when the Arizona Cardinals added a linebacker in the first round instead of a coverage player, but the addition of Zaven Collins could certainly pay dividends for the Arizona defense in 2021. But if the team looks to address the secondary in the 2022 NFL draft, Josh Jobe could be the player they look to add. Jobe stepped into the starting lineup this past season opposite Patrick Surtain II, and notched 11 pass breakups and 55 tackles. He is a physical cornerback who is active both at the catch point and against the run.

If you want a breakout star in 2021, this is your guy. The former five-star recruit has played only 337 career snaps -- with a career-high 130 coming last season -- but he's been about as productive as one can be on those reps. On only 196 career pass-rushing snaps, he's generated 51 pressures. He's still slim at his listed 230 pounds but has room to grow into his long 6-foot-5 frame.

Here is where the Arizona Cardinals rank in terms of average, best and worst:

Below you will find a Week 6 roundup for the Cardinals in our consensus 2021 NFL Power Rankings.

How they've improved: The third-year running back was given a larger role this season, and he is not just embracing the opportunity, he is flourishing. Edmonds is the Cardinals' leading rusher and is on pace to smash his previous career high for yards in a season. With a big game or two, he could have a 1,000-yard season for the first time in his career. But Edmonds' game isn't limited to just carrying the ball. He spent the offseason working on his receiving skills, and it's paid off. He's tied for the team lead with 23 catches and has become a favorite target of quarterback Kyler Murray. -- Josh Weinfuss

Kyler Murray, Kliff Kingsbury and the offense get much of the headlines coming out of Arizona, but it was the Cardinals' defense that took the NFC West leaders to 5-0. The Cards held Trey Lance to 10 points in his NFL starting debut and stopped the 49ers on four of their five fourth-down attempts in a 17-10 win. The most dramatic of those stuffs came in the second quarter, when Lance scrambled toward the right pylon before slamming into a wall comprised of brick (Tanner Vallejo) and mortar (Isaiah Simmons). After the game, DeAndre Hopkins called it "championship football." Lance would probably describe it a different way.

Below you will find the weekly NFL regular-season schedule with results for the Cardinals in 2021.

2021 Strength of Schedule and NFL Opponents

The Arizona Cardinals have the 15th-most difficult schedule based on the 2020 record of their 2021 opponents (2021 NFL strength of schedule).

The table below are all of the 2021 NFL Draft picks selected by the Arizona Cardinals.

The chart below displays the Fantasy Football Average Draft Position (ADP) movement over the past 30 days for Arizona Cardinals quarterback Kyler Murray in 12-team standard-scoring formats. 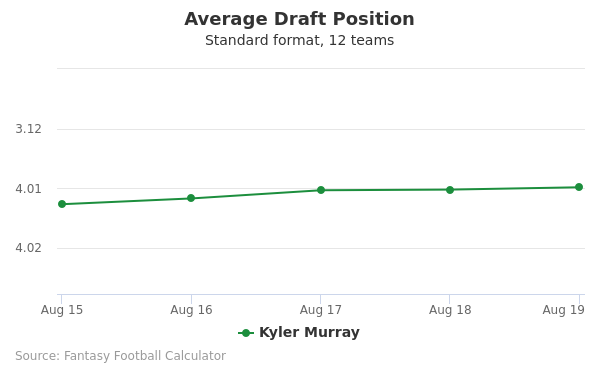