Leading up to the start of the 2018 NFL season, we will post 2018 Fantasy Football Profiles for all fantasy-relevant players.
Embed from Getty Images
In the first year without Kyle Shanahan running the offense, the Atlanta Falcons saw their offensive output drop from a league-best 33.1 points per game to middle of the road (22.1 PPG, 15th) in 2017.

Not only did Devonta Freeman miss two games after leaving Week 10 in the first quarter with a concussion, but he dealt with MCL and PCL sprains down the stretch.

Yet as the lead back of the team's 1-2 rushing attack with Tevin Coleman, Freeman still managed to finish as fantasy football's RB13 (PPR's RB14) in 2017 despite those injuries and the team's overall offensive decline.

Before last season, however, Freeman finished as fantasy's RB1 and RB6 in 2015 and 2016, respectively.

Not only has Freeman been highly productive on a full-year basis, he has provided fantasy owners with both weekly consistency and upside.

Freeman ranked 10th in red-zone rush attempts (34) in 2017 as he received 63.6 percent of the team's rush attempts inside the 5-yard line. Missing two games in 2017, those numbers were down year-over-year.

In 2016, Freeman ranked third in red-zone carries (53) with an 84.2-percent share of his team's carries inside the 5-yard line. (Only Melvin Gordon had a higher percentage.)

Even though teammate Tevin Coleman has 19 touchdowns in the past two seasons, Freeman is tied with Gurley for a league-high 35 touchdowns over the past three seasons.

Below is a chart of his ADP at Fantasy Football Calculator over the past month: 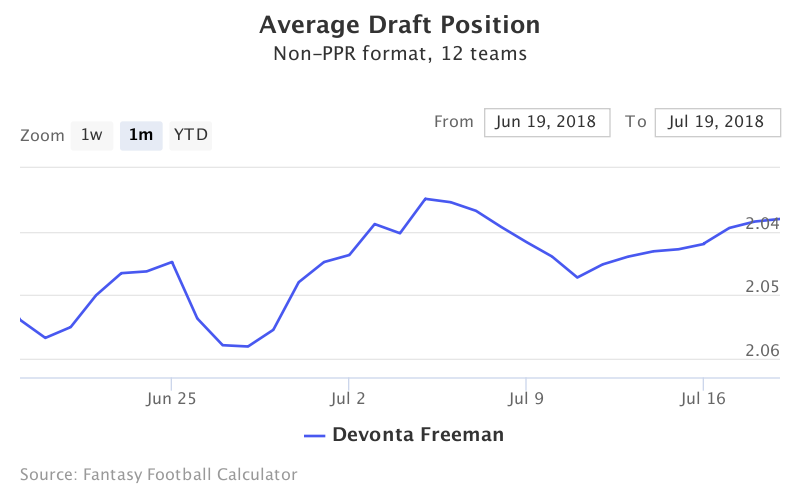 Below you will find full-season projections for Atlanta Falcons RB Devonta Freeman for the 2018 NFL season:

A versatile do-it-all back, Freeman is one of the safest second-round picks. Although his ADP and my ranking are equal (RB11), there is a significant dropoff from Freeman to the next tier of running backs. The gap in my fantasy football projections between RB11 (Freeman) and RB12 (Howard) is twice as much as the gap between RB5 (Saquon Barkley) and RB11 (Freeman).