The table below lists Higgins' receiving and rushing stats by year and for his career.

The table below include awards and honors that Tee Higgins has received.

If it weren't for the season-ending injury to Cincinnati Bengals quarterback Joe Burrow in Week 11, it would have been an even better 2020 season for fellow rookie Tee Higgins.

Leading the team in both receiving yards and touchdowns, Higgins finished his rookie campaign with 67 catches for 908 yards and six touchdowns on 108 targets. Meanwhile, Higgins (14) had twice as many 20-yard receptions as any other receiver (Tyler Boyd, seven) on the roster.

The rookie barely played in Week 1 (15 snaps, zero targets) and Burrow was injured in Week 11, as noted above. Before Burrow's injury, however, Higgins was really hitting his stride from Weeks 3 to 10.

During that seven-game span, Higgins averaged 14.3 fantasy points per contest and only 10 receivers scored more fantasy points than the rookie. He had at least 62 yards in six consecutive games from Weeks 4 to 10 with an average of 88.0 per game over that stretch.

The image below shows the change in Fantasy Football Average Draft Position (ADP) of Tee Higgins over the past 30 days. 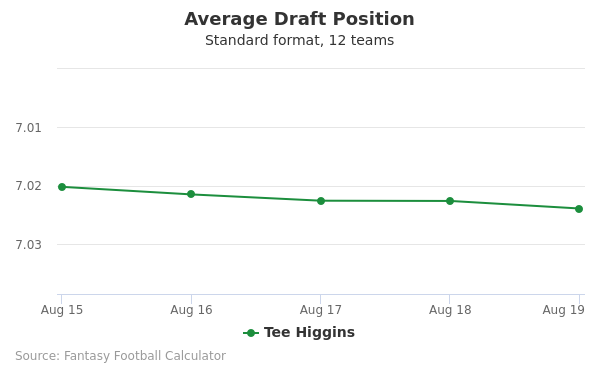